It happened one night. By the time I gave up the hopes of retaining all the blogposts in the new site, I accidentally stumbled upon this plugin "mosimage" for Joomla 1.5.X. This was a God sent thing for people with voluminous Joomla 1.0 site. Once I installed it and moved the content database to new one, I found my new version site up in few minutes. Quite unbelievable!!! So I dedicate this upgraded site to "Burek" who wrote this plugin. Now I have got the basic site up and running and the enhancements will be in coming days for sure. As of now I am planning to build a separate library section for my books and DVD collection, for which I have some other plans for future. However the rest of the other functionalities are left intact with the old version.

Read more: Good to be back online

It is a general notion that Indian male are MCPs (Male Chauvanist Pigs) even though henpecked. Bra burning feminists have a field day in claiming their righteous share from men. But as a normal & trying to be progressive husband, I feel that Indian women feel secure and comfortable in being "supressed" by their spouses. They can't handle their husband's respect for their space instead feel assured that they are being "noticed or considered" when they are restricted or ordered upon. Indian women don't know to gracefully accept the respect given to them, instead get a high in "claiming" them. Like most of the marriages I had seen around, at the age of 60's, my parents' marriage is a civil facade which is maintained for the sake of the society. May be my father was wrongly "taught" to keep the wife "under control" which didn't go well with my "assertive & really progressive" mother which lead to the state of not even acknowledging other's presence at the ripe age. Taking this as a lesson I tried to give my wife her breathing space, ample opportunities to be herself without hindering her personality but at the end of the day I realised that women like "ruling" & being "ruled", something like "Intermittent Reinforcement". That's why girls always fall for rapists and bad guys rather than a "perfect husband material". May be I too have to become a MCP to have a "normal Indian marriage" life!

Hai Guys, I have joined the twitter bandwagon. For a while I was wondering why to 'tweet' but later realised that microblogging is more convenient when it comes to sharing the tidbits, that doesn't necessary conform to the long posts. Getting the thoughts within 140 characters is bit challenging. So hereafter let me post my micro posts & scribblings in twitter & elaborate posts here in Online Galatta.. Also I am eager to read other's tweets also, in that way it will provide a sort of interaction. Come and join me in My Twitter Page!

I was really shocked when I saw the IELTS score - 8/9. What was more shocking was that I got 9/9 in the Listening test. Normally I am very poor in getting the foreign accent and that is the main reason I don't see English movies. Infact I feel that I had messed up with my early US Visa attempts because of this 'accent' issue. So I could attribute this score to the lady luck only. I would like to pass of this luck charm to somebody who is taking IELTS. If anybody in Bangalore, who is to take up IELTS in the very near future, wants IELTS material please drop me a mail through contact form. I'll personally give away the IELTS materials DVD, which has a good number of practise tests, to them. Let them also get lucky with that material. Ha! Ha!... Jokes apart, oflate I am managing to get the foreign accents right after I started interacting with my UK clients on the phone, especially my onsite counterpart guy.
Read more: Respond... Don't react

It had been a while I had blogged and I can easily pass the blame on IELTS exam I took recently. (I am making excuses as if I was studying for 24 hrs a day for this exam). I am yet to receive the score and a lot depends on it because based on this only I can take further actions on my Australia immigration. Since I had taken TOEFL years back, naturally I tend to compare between these two. I enjoyed TOEFL very much than IELTS because of TOEFL's complexity - sentence patterns, grammatical errors in the sentence etc, which is absent in IELTS. I scored 90% in TOEFL then but if made to take it now I can't assure that score again. Am I am so critical about myself? Recently a psychiatrist told me the same...

It is always nice to revisit the past, especially when you feel that you are fit enough to get into your old dress which you thought can't be worn again because of expanding body. Till date of all the pairs of jeans I had, I loved the couple of what I bought in Coimbatore back in 2003. They were of size 30". Over the years my hip size grew up and after a while I couldn't even get into it. My hip size shot to 34". I used to give away my old dresses to underprivileged but I had kept hold of these jeans with a hope that I'll be able to wear it sometimes. After the last month's workout, I just tried wearing it.... and it fit so well that I spent this day in the old jeans. Even though my tummy reads 33", it is so gel like that the tummy got into 30" jeans comfortably. The kind of excitement I got wearing the old blue jeans was amazing - a refreshing sense of returning back to 2003 and a revived impetus to get back to shape all again. 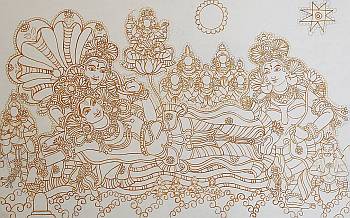 Hai Guys... It had been a while I had updated my blogs and not that I had abondened it. Change of residence to Bangalore proved as deterrent to blogging. An unusual worktime (UK Shift) that disturbs a lot with my creative evenings is the major reason, which is further compounded by a serious creative block. This block is the reason why my blog oflate is becoming like a personal diary. It had been sometime I had read the books I bought with love from the Chennai Book Fair. Also I seriously miss travelling because of the on going wood work at home. So I was catching up with the missed out movies like a maniac on weekends - 2 per night (Kandein Kadhalai, Unnai Pol Oruvan, Nadodigal, Ishqiya) so life is quite erratic and I hope that it will take sometime for me to get settled to this timings.

Only silverline of this dark cloud is that I had started my third Kerala Mural - Anantha Sayanam, which had been my dream painting for a while. However the best part of this rough patch is that I am able to spend more time with my kid Buttu Singh (Aadhithya) till noon and making my parents settling down a relatively simpler process. Like any phase I am just waiting for this phase to "pass by" soon.