Admitted that it will be more of an subjective answer rather than being objective because of the experience that varies with the individuals. Yet this post is based on a typical Indian guy (shall I say archaic) point of view / journey of sex. Whenever I had friends who got married after me, I used to get queries from them regarding sex. Considering that I myself was suffering from Performance Anxiety when I got married, now I feel that have a company in a good number of guys who have apprehensions about sex after marriage. When looking back why it was so, I feel that it was because of the way we were brought up with sex discussions as a taboo, with a "helping hand" that ensured our virginity to be lost only with the wife in the "first night" after marriage. This doesn't mean that pre-marital sex didn't exist then, but I am talking about those who either did't have the chance / courage to do that.

Ever since I moved to Bangalore, I always wanted to learn Kannada. Rather than an urge to learn other language, I wanted to learn Kannada as a respect to the place I live. To an extent I could identify / empathise with the hostile approach of localites towards the migrants. Most of the migrants doesn't even bother to learn the local language or simply apathy about the local culture. Two weeks back an incident happened. When we were travelling to ISKCON temple in the BMTC bus, there was a altercation between Akila and a local woman regarding the seat. A man tried to intervene but he was pissed off with Akila "ill-timed" shouting of "shut up" when the lady was saying that these people didn't learn the local language Kannada. The problem is literally we don't get opportunity to converse in Kannada because in IT everybody, including the local kannadigas, feels comfortable talking in Hindi / English. So my efforts to learn Kannada didn't fruitify. Last week when I decided to make use of the weekends by learning something new, I stumbled upon the spoken kannada classes conducted by Kannada Prachara Parishat on the Hosmat Hospital Campus on Sundays at 10:00 AM - 1:00 PM. Luckily I called at the right time as they were commencing a batch the next day (Jan 09, 2011). Till now two sessions had passed by and 10 more sessions are there. I really enjoy the lively learning sessions, so I thought of sharing the contact details so that anybody intrested in learning Kannda can make use of it. Contact: Mr B.V Raghavan (Mobile: +91-9448878569)or Mr. Natraj (Mobile: +91-9845680958). - {oshits} readers might have found this details useful. 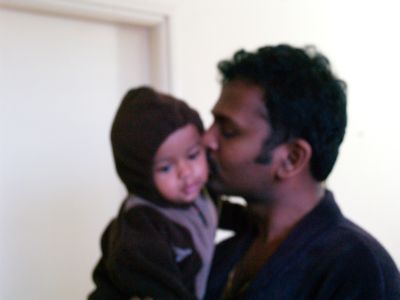 Well... an another trip had come to an end and this time it was a mixed experience. Stay at London gave a nice introduction about Europe and gave a peek to the English legacy. I loved the way the historical look of the city was maintained and the organised way of British. It took sometime for me to get used to the strong critical views opined by the opposition parties and the tax payers against some of the measures of the Government. I also happened to witness the 'Tube Strike' when I was there. I feel that the politicians and labour unions are same everywhere in the world. Because I missed Buttu, I was unable to enjoy too much on the day to day life in London. Things would have been different if I had gone there when I was single but at this moment my priorities are with my family first. While coming back, I happened to speak to Jishore who was contemplating migrating to UK. I told him that London lacks the vibrancy of Dubai and any given time I would readily pack my bags to Dubai. It is not that I don't want to go to London again but the answer needn't be a ready & desperate 'Yes' and subjected to the priorities & situation then. I am not sure of whether I'll visit London again, but the experience is definitely to be cherished and treasured. When I woke up Buttu after reaching home, I felt that I am clear of where I really want to be. Also I realised that there is definitely a lot of love for Bangalore from me.

Hai Guys, even in this hard pressed time I am working towards revamping the Downloads section. I am trying to give links to the stuffs that are not so commonly available but useful. So my attention is now more towards the e-books and comics. In a way, it is my way of promoting those useful materials. You can find a good collection of Amar Chitra Katha, Tintin comics and now searching for Asterix & Obelix series. Once I am back to India, I'll upload the tamil e-books I have collected. Regarding the audio books & dramas, I'll share whatever stuff I get. Hope you guys like these and leave your comments.

It is now officially confirmed that I'll be travelling to London this weekend for a month. This opportunity came as my onsite counterpart had quit his job there and I'm travelling as his stand by. I am eagerly looking forward to break the jinx of my travel to western countries. Ever since my Student Visa to US was refused, it affected me a lot even in the interviews where people tend to get doubt about my possibility to travel if recruited. So more than anything this is a welcome break in my career. I haven't planned anything for the travel except carrying my laptop and Ponniyin Selvan series for my entertainment. Already I have recieved invitation from Mr. Ian, my batchmate in Kerala Mural class, to come Yorkshire for a weekend. My darling Vijay's younger brother Madhu had reached London 2 weeks back, so I hope not have a lonely time there. There is a 3 hours transit break in Dubai which will help me in pondering over Dubai memories. Infact Dubai is the place that keeps haunting me ever. I'd love to take you through the streets of London through my eyes & posts. Only thing I'll miss a lot is Buttu's magical smile for a month. To get some, lose some!!

It happened one night. By the time I gave up the hopes of retaining all the blogposts in the new site, I accidentally stumbled upon this plugin "mosimage" for Joomla 1.5.X. This was a God sent thing for people with voluminous Joomla 1.0 site. Once I installed it and moved the content database to new one, I found my new version site up in few minutes. Quite unbelievable!!! So I dedicate this upgraded site to "Burek" who wrote this plugin. Now I have got the basic site up and running and the enhancements will be in coming days for sure. As of now I am planning to build a separate library section for my books and DVD collection, for which I have some other plans for future. However the rest of the other functionalities are left intact with the old version.

Read more: Good to be back online

It is a general notion that Indian male are MCPs (Male Chauvanist Pigs) even though henpecked. Bra burning feminists have a field day in claiming their righteous share from men. But as a normal & trying to be progressive husband, I feel that Indian women feel secure and comfortable in being "supressed" by their spouses. They can't handle their husband's respect for their space instead feel assured that they are being "noticed or considered" when they are restricted or ordered upon. Indian women don't know to gracefully accept the respect given to them, instead get a high in "claiming" them. Like most of the marriages I had seen around, at the age of 60's, my parents' marriage is a civil facade which is maintained for the sake of the society. May be my father was wrongly "taught" to keep the wife "under control" which didn't go well with my "assertive & really progressive" mother which lead to the state of not even acknowledging other's presence at the ripe age. Taking this as a lesson I tried to give my wife her breathing space, ample opportunities to be herself without hindering her personality but at the end of the day I realised that women like "ruling" & being "ruled", something like "Intermittent Reinforcement". That's why girls always fall for rapists and bad guys rather than a "perfect husband material". May be I too have to become a MCP to have a "normal Indian marriage" life!

Hai Guys, I have joined the twitter bandwagon. For a while I was wondering why to 'tweet' but later realised that microblogging is more convenient when it comes to sharing the tidbits, that doesn't necessary conform to the long posts. Getting the thoughts within 140 characters is bit challenging. So hereafter let me post my micro posts & scribblings in twitter & elaborate posts here in Online Galatta.. Also I am eager to read other's tweets also, in that way it will provide a sort of interaction. Come and join me in My Twitter Page!