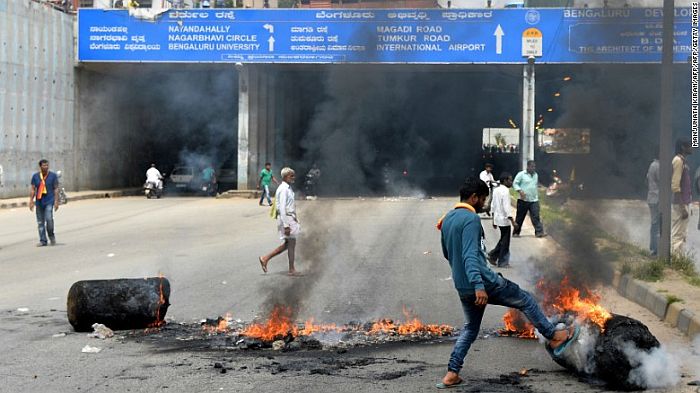 Whenever there is a riot, it leaves scars, bitter memories for the people directly affected. Even for those who are not directly involved, it creates some uneasiness in the personal / professional lives. I am referring to the riots and protests that happened in relation to the Cauvery river and Mullai Periyar river issues that had been going on between the states of Tamilnadu, Kerala and Karnataka for long time.

I am not looking into the "who is correct / who is wrong" aspects of these issues but I also agree that there are people affected in both the sides of the states. But what we forget / don't want to is "seriously working towards closing these issues" on long term. We notice that these issues are given too much importance and bloodshed only when the state elections are around the corner. The politicians also don't want to abide by the arbitary bodies set up for these issues or Supreme court. Instead the politicians just want to keep the issue burning alive till they reap the benefits in the elections. The simple fact that the whole issues are politiced for the personal benefits of the political parties can be understood by even a person with lowest IQ.

But what makes the so called literate / educated people with high IQ turn hostile? Is it the chauvinism or the jingoistic display of regional patriotism or getting carried away by the social network / media's overtime euphoria? I remember the time when the Mullai Periyar issue was burning at its peak. I had loads and loads of Malayali friends and people used to make fun of me that I am a Malayali in Tamil body. At that time I was very active in Facebook and happened to see lots of false news like Mullaiperiyar dam is about to collapse, many frightening images like the dam bursting and floods submerging the villages etc. There was an unofficial Kerala state sponsored movie called Dam 999 which scared the people about the lives of few people in a town which is closer to a dam and one fine day the dam collapses.

The social media feed was littered with all sort of threating messages, fabricated images that had only one purpose - create a scare among the people. As a sensible person who believed in the arbitrary body that confirmed the strength of the dam, rather than sticking to mere regional identity of being a Tamilian, I was able to understand the malicious intentions behind those messages and forwards. The intentions were very much obvious - (i) to demolish the dam so that the dam built by Kerala in Idukki for its Hydro Electric power generation should get all the Periyar River water and (ii) there was a local election around the corener at that time in Kerala and the Congress government played its regional card.

So in my Facebook account I posted a message that I am blocking the messages from the Malayalee friends who are posting such false propaganda and after few weeks I found that I had been unfriended by many. I am glad for ending the friendships with those persons.

Years later I am now facing the uneasiness between myself and the Kannadiga colleagues. I never discriminated anybody based on the region they belong to. Infact even after the Mullai Periyar aftermath, I am still friendly with Malayalees as I look them on individual basis rather than grouping under the race. I believe that I am an universal citizen and that's the reason I had made Bengaluru as my base without thinking that it belongs to another state / culture / language. But after this Bengaluru riots in 2016, the attitude of my Kannadiga colleagues have changed.

Whenever I join them for a coffee / tea break, there are unwanted mentions about how TN instigated violence in Bangalore, how TN is milking sympathy and trying to lure IT companies to Chennai from this situation etc. I really feel uncomfortable during those moments and since it is a waste effort to "enlighten" them that atleast these kind of conversations shouldn't be conducted in the workplace. Obviously I try to avoid these uncomfortable moments by skipping the pantry visits and eventually this will distance me from the "team".

Since I had seen the plight of Tanjore farmers and how much the Cauvery belt is depending on this river, I find the reasons cited by Karnataka politicians unresonable. If we look into this riot carefully, it is all orchestrated by the chauvinistic group which has no link to the farmers. How Bengaluru environment, waterbodies are encroached by the real estate giants is something understandable by even the kids also.

For an example, there was a huge lake in Bellanduru village which is now usurped / encroached by the real estate companies. The lake is now filled with huge mounds of sand and depleted. There are lots and lots of cases of Sobha, Mantri builders usurping the lake and building high rise apartments. Instead of stopping all these things, Karnataka politicians take Cauvery issue which is a lifeline for Tamilnadu farmers.

The so called "educated" other state colleagues never look into these facts and instead they try to "assert" their regional patriotism by blindly following the politicians' mislead path. Earlier we believed that education will enlighten the people so that the social diseases like untouchability, gender equality, caste system and jingoistic regional preferences will disappear. But with the fault educational system, these epidemics are just growing stronger day by day which is plauging the country in the form of innumerable honour killings, rapes, raise of case based parties, regional riots that dominate the news scene these days. The media prostitutes like TV9, NDTV did their pimping job perfectly by fanning all these feelings.