The auction of IPL threw new controversy when an unknown Chennai guy called Karupasaamy made himself available for auction and was sold to Kings XI for a prize of USD 750,000 dollars which is the rate equal to West Indies sensation Kieran Pollard. Karupasaamy, who is the leading run scorer in Marina beach cricket is also an opening bowler. He was very happy about his price in IPL. Lalit Modi, the commissioner of IPL told the press “Today totally 12 players were sold, 3 players fetched the maximum amount. They are Pollard, Bond and Karupasaamy”. When asked who Karupasaamy is, Mr.Modi told “Karupasaamy is a promising Under 19 cricketer who plays for India. you guys dont know him??? You guys should start concentrating on Under 19 cricket too” laughed Modi thereby insulting many journalists there in the conference room. Priety Zinta and Shilpa Shetty who were there at either side of Modi, as usual laughed as though Mr.Modi cracked the joke of the century.

When asked to Priety Zinta what made her select Karupasaamy she told “We were looking for an all rounder for our team. Since Irfan Pathan was of really no value to any one in IPL we thought we will get a new all rounder. Since Karupasaamy is a promising Under 19 all rounder who plays for India we thought he will fit the bill. Lalit told us that he can run faster than Ramesh Powar which is a great qualification!!!. Since Karupu is also known as ‘Junior Sachin’ we have decided to make him dance with Daler Mehandi in the Kings XI music album!!!”. When asked if he will play a match Priety told “Are you joking??? Who plays cricket in IPL??? IPL is a stage where we can dance, laugh, have fun with the 22 men who step to the field and so Karupasaamy will be no different”.Priety Zinta continued laughing for whatever Lalit Modi said in the press conference.

Karupasaamy, who was identified as a fisherman in Vyasarpadi area was delighted when he heard the news. He told “My friends made fun of me by mailing to Lalit Modi that I am an under 19 cricketer and am available for auction. Since Lalit has no idea on under 19 cricket, he thought I am also a player and he selected me for auction” thereby clearly showing even Lalit Modi has no knowledge on Under 19 cricket.

When asked how he feels, Karupasaamy told “Excited. Good bye to TVS! Good bye to my aluku dhoti. Armani here I come. Hello Jet Airways!!!”. When asked of his goal for IPL he told “Coming in television the maximum number of times, having fun with Mandira Bedi, dancing in the pavillion for all sixers and fours, hugging Priety Zinta after each and every ball and jump with her whenever she jumps for no reason during the match”.

Lalit Modi told there was a huge demand for Karupasaamy and nearly 4 franchisees fought for him. “I think franchisee owners were smart. Vijay Mallya, Shilpa Shetty, Priety Zinta all watched his under 19 performance this year and they are convinced that he can make big in this year IPL. Mallya thinks he is an ideal replacement for Jaques Kallis. But unfortunately the money was too high and only Kings XI were able to afford Karupasaamy “. 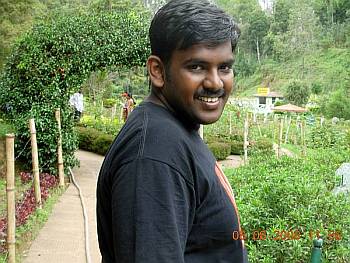 Somu can be reached at sksrajan (at) gmail (dot) com.